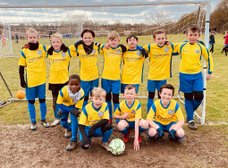 Another full squad on an overcast, humid day that also saw a bit of rain. And this reporter was a little bit nervous about this game – the Iguanas had a 5-game unbeaten run to defend and, not to put too fine a point on it, had been gubbed by Wilvale in our last two meetings, losing both games by a 4-goal margin and shipping 13 goals in total.

Oliver, Isaac, James, Mason, Rui, Thomas and Lewis got us under way, and straight away our nemeses showed why the Iguanas had struggled in those prior games with an early break that resulted in a corner. Fortunately, neither team were paying too much attention and the ball was caught easily by Oliver. Danger had been flagged, however.

The game was a little cagey for the next few minutes, but the Knights were showing incisive passing and using their wings really well. Another corner saw their players poorly marked by the Iguanas, and this time the Knights were alert to it, a good quality shot putting the ball in the back of the net.

The Knights pushed again straight from kick off, the Iguanas struggling to clear their lines. Each time it looked like they were about to clear, the Knights managed to break, and break quickly. Within a couple of minutes, one break saw the Iguanas’ defensive life on the back foot. Our players caught up with the pace of their break, but a Knights player went down in the box and a penalty was awarded. A well drilled kick gave Oliver no chance. Fears were building that this could be another long, bad day at the office.

The Iguanas did show composure at this point, and even started to push into the Knights’ half of the pitch. Lewis and Thomas only just got in each other’s way at a critical moment, and an opportunity went unpunished. Thomas and Mason then combined well, with the final shot from Mason just going wide.

Rui battled hard in midfield from the restart, ensuring that the Knights were given less room to play the ball, and creating breaks of the Iguanas’ own. A corner resulted in a headed attempt from Thomas that went over, but the intent from the team was excellent.

Isaac and James made way for Ethan and Sam. Another Iguanas move saw Thomas and Rui moving the ball with purpose. Lewis’ shot from a well-delivered pass was saved by the Knights’ keeper.

The Knights were far from quiet during this spell, and made some quick breaks. EthanR demonstrated his usual prowess at reading the game and was in the right place at the right time, either forcing the Knights into awkward positions, or controlling the ball and clearing with good quality passes. Sam also showed huge determination, following his defensive partner’s lead on the opposite side of the pitch, with great energy in harassing the Knights’ players and racing back when they tried to attack. When the Knights did manage to get past, it was often wide, so all they could do was cross. Oliver was wise to this and made some decent saves, albeit one being palmed into the path of a Knights’ player, who thankfully put the ball wide.

Rui, Thomas and Mason made way for EthanT, Travis and Stanley.

Straight away they were into the action, the Knights breaking once more and Stanley and Travis tracking back well to keep the danger minimised. Coby then came on in place of Lewis.

The team were battling hard, and getting stuck in with first tackles, but follow ups were occasionally a little lacking, and so the Knights were still managing to find space. EthanT did manage a nice move into the Knights’ box, but his shot was saved.

Another Knights corner was palmed out of danger strongly by Oliver, and straight into EthanT’s path, but the break was handled well by the Knights. During this midfield battle, Stanley needed to come off, injured, and so Thomas came back into the mix.

5 more minutes of battling in the centre of the pitch then saw the half-time whistle blow. A bit of a shaky start for the Iguanas, but they got themselves back in the game and were starting to show spirit.

The same line up of Oliver, Isaac, James, Mason, Rui, Thomas and Lewis got the second half under way.

The Knights were once more quick out of the blocks, forcing a corner. But the Iguanas’ defence was holding its positioning and more alert now. The ball wasn’t well cleared, but Mason was providing fantastic defensive cover, to ensure the score line was held.

James and Isaac were also showing good awareness, making it first to free balls and carefully clearing danger to allow the Iguanas to break. Thomas and Lewis combined in one break, being unlucky to see the final shot go into the side netting. Thomas was then unlucky from the right side, his shot going wide.

A Knights’ corner was nicely saved by Oliver, however as the Iguanas were clearing their lines, a free kick was awarded to the Knights. The kick was nicely crossed, but didn’t look to be going near a Knights’ player. Unfortunately, poor communication between the Iguanas led to an Iguana heading the ball into the net for a really unfortunate own goal.

This might have resulted in a lesser team getting despondent, but the Iguanas are not a lesser team! They carried on building the momentum that had started half way through the first half and continued now. A corner for the Iguanas was played long, Rui collecting it well and looking for opportunities. He passed the ball accurately across the box to Thomas, who with fabulous composure took a first-time strike at the ball, thumping a shot that the Knights’ keeper had no chance with.

More really strong play for the Iguanas saw the Knights finally struggling to contain them. They made some breaks, but in this period of the game they rarely made it beyond half way, Rui bossing the midfield. Collecting the ball in the middle of the park, he found Lewis clear and running through the middle. Drawing a couple of Knights’ players in before releasing the pass, Lewis was in on goal. The shot was scuffed slightly, but not enough to see the ball in the back of the net!

EthanR came on to relieve James. EthanR and Isaac ensured the Iguanas continued to have a strong defensive line as the Knights tried, unsuccessfully, to push through.

EthanT, Travis and Stanley came on for Mason, Thomas and Rui, all of them looking worn out from the physical effort and mental exhaustion of concentration.

The Knights were managing more breaks now, but in nowhere near the numbers they had managed in the first quarter of this game, and for the majority of our last two encounters. Oliver showed great awareness when he realised a long ball had deflected off an Iguanas’ player, running out to save the ball from going out for a corner and getting the ball to his team up the wing. Travis was watching the left wing well, and getting plenty of action down that side with the Knights pushing the ball that way increasingly.

Lewis took a break, with Coby replacing him. And straight away Coby and Stanley linked up, their move resulting in a shot just going wide.

Stanley and Isaac were back in defensive mode on the right side, forcing the Knights into an awkward shooting opportunity which ultimately went wide. Stanley then had to be replaced once more by Thomas after a tussle with a Knights’ player. And Rui came on to give Isaac a rest.

In the final couple of minutes, Rui again showed good grit and spirit in the centre of the park, and excellent tracking back to ensure the Iguanas weren’t exposed at the back. EthanR was once more on the ball in every sense, reading Knights’ moves and picking the right option every time - whether tackling decisively, letting balls run out or shadowing his opponents to leave them no options.

On balance, the Iguanas were once again on top with the clock running down. A final corner was nicely taken, and Coby met the ball really well. He managed to get the ball out of his feet and shoot, but the ball went just wide of the post, a move that would prove to be the final one of the game.

A massive, massive improvement over our last games against this very strong side. Great team work and all of the team battling for the ball. The only spell where concentration was lacking was in the first 10 minutes or so of the game, the team building and building from that point, and showing great strength and spirit, to the point where in the majority of the second half, they were the stronger side, and looked to be the team most likely to take the victory.

The Iguanas might even consider themselves a little unlucky, with a penalty awarded against them and an unfortunate own goal. But this is a draw that feels very much like a win, a fine, dogged team performance and now 6 games unbeaten.

Iguana of the Match : Mason – set high standards for himself and showed massive determination and spirit. Worked very hard against a good team.